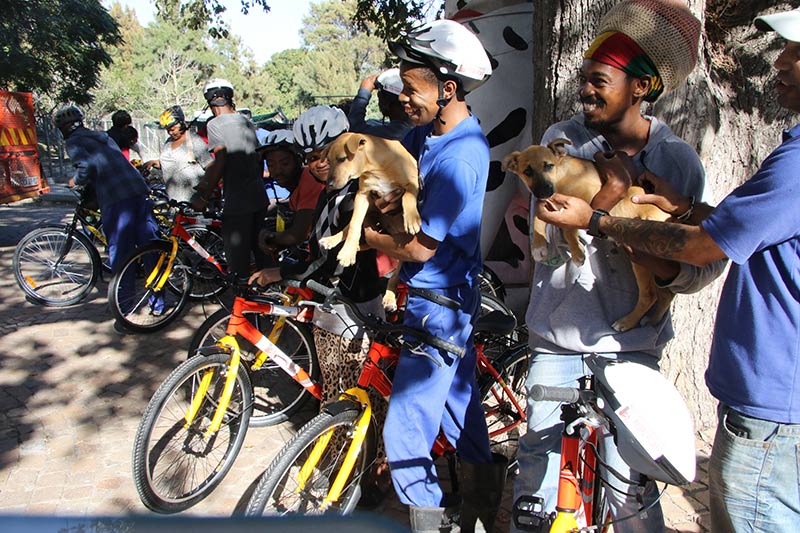 When the 2017 Cape Town Cycle Tour was cancelled less than an hour into the event, the Pedal Power Association organised a new 100 km road event to take place the following weekend, giving a few hundred cyclists the opportunity to get rid of some of the energy and fitness accumulated for the Cycle Tour.

“Given the fires that ravaged the Imizamo Yetho community in Hout Bay on the weekend of the Cycle Tour, we decided to dedicate a portion of the entry fees received for our ‘WACT’ (‘Week After Cycle Tour’) Ride towards a charity in Hout Bay,” said Pedal Power Association CEO, Robert Vogel.

In this way PPA was last week able to hand over seven #Bike4All utility bicycles to the Domestic Animal Rescue Group (DARG) in Hout Bay. Given PPA’s agreement with Qhubeka in respect of bicycle donations, the bicycles were matched by Qhubeka, enabling 14 bicycles in total to be handed to DARG.

The bicycles will be used not only by DARG staff and community assistants to get to-and-from work or in their daily commutes, but also to take food and water to abused animals in the greater Hout Bay community.

“It was humbling to see the immense pleasure and gratitude when the bicycles and helmets were handed over. These bicycles will change lives,” Vogel said.

The #Bike4All Project was launched in January 2017 when the Pedal Power Association (PPA) and Bicycle Empowerment Network (BEN) combined forces to launch the “#Bike4All” programme. The programme has a strong, yet simple vision: Put more people on bicycles. The bicycles donated by PPA and Qhubeka are sturdy and robust, perfect for commuting and day-to-day activities. For more information, please contact jannis@pedalpower.org.za